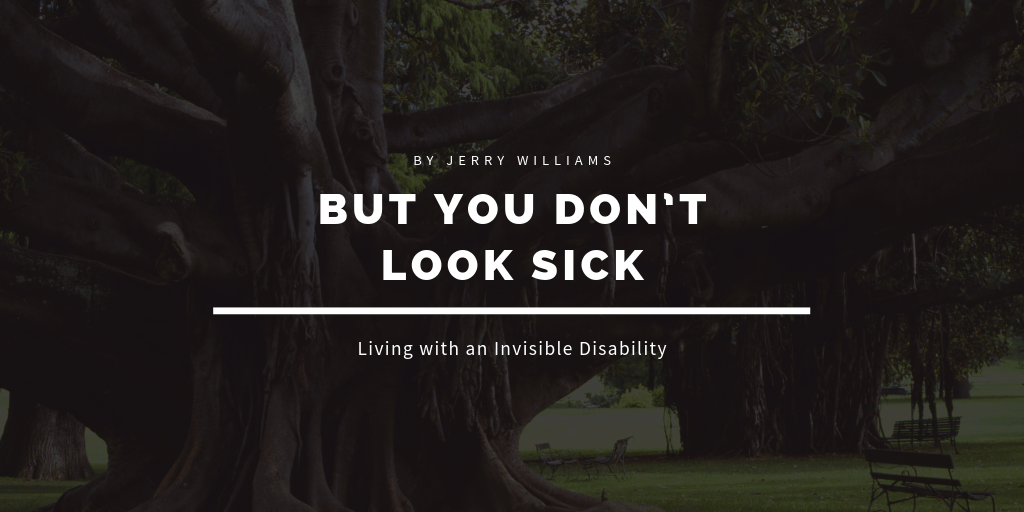 There is an unfortunate stigma on many diseases that are painful and debilitating leaving us no longer able to work or to participate in what was once a “normal” and active life. Some may not show any outward visible signs of illness. These are referred to as invisible disabilities. There are many such diseases that can fit into this category: Lupus, Rheumatoid Arthritis, MCTD, and Myositis, to name just a few.  Many of us tend to look healthy at first, but in no way does that mean we are not sick. “But you don’t look sick” is a statement that is a setback for many of us when trying to get a diagnosis, not to mention it can be hurtful.

Many people have said to me over the years, “But you don’t look sick” or “Well, you look great.” Many are well-meaning with their comments while others seem to cast doubt as if I am truly sick. This makes for a difficult existence when you find yourself in the invisible disability category since doctors are guilty of this seemingly innocent statement and may make judgments based on our appearance. This very predicament is a large part of why it took over two years for me to get a true diagnosis while having many misdiagnoses along the way.

When I became ill in 2003 my main complaints were pain, weakness, fevers, and fatigue. Could these symptoms be vaguer? These lasted for about two weeks before I lost the use of my legs, collapsing on my parent’s porch one afternoon, unable to do move. I knew then my life would never be the same.

I was taken to my local hospital by ambulance in a terrified state.  I was admitted immediately for what ended up being a ten-day period of which I endured test upon test only to find my doctors stumped. On the tenth day, I was transferred to Johns Hopkins, one of the best hospitals in the country. I was an inpatient there for 4 days and was seen by multiple specialists whose final diagnosis was psychosomatic illness and referred me to a psychiatrist. My family and I were completely flabbergasted that these doctors thought I was mentally ill and making myself sick. But, for the sake of moving forward to truly find out what was wrong, I saw the psychiatrist and was given a clean bill of mental health, aside from situational depression.

My next attempt to get a diagnosis was at the University of Pennsylvania. There I saw a Neurologist and a Rheumatologist and both told me there was nothing they could do for me. Doctors kept telling me that whatever was wrong with me was not “in their specialty.” I became very frustrated and traveling two hours each way to these doctors was difficult for me. My health was continuing to decline and it seemed as though I would never know what was making me so sick. Thankfully, with the help of my parents and my continued determination, we knew we could not and would not give up.

After much thought and exhausted from the travels, we decided to see a local Rheumatologist who had been a part of my initial stay at my local hospital. We figured we would see him outside of the hospital setting and relay to him my lack of progress and inability to find a diagnosis. It was a good thing we did, too! His first words were what finally gave me hope and eventually a diagnosis. He said, “Has anyone ever ordered a muscle biopsy?” Instantly it made perfect sense. I was having muscle pain and weakness and while other doctors had performed biopsies on pretty much everything else, they had done so with my muscles

A week later I had the biopsy and it proved, without a doubt, that I had polymyositis. However, upon returning to Johns Hopkins with the hope of starting treatment for this rare disease, I found nothing but doubt. And part of it, I believe, was because I did not look sick on the outside.

With the biopsy results in hand, I returned to Johns Hopkins a few weeks later thinking they would now create a treatment plan to arrest this autoimmune disease that was wreaking havoc on my body. Sadly, I was mistaken. The doctor at Hopkins read the report, looked me in the eyes and said, “You do not have myositis.” Of course, I immediately became defensive as well as confused wondering how she could make that statement after reading the biopsy report that concluded I did, in fact, have polymyositis. She asked that I arrange to have the biopsy slides mailed to her so she could view them under the microscope for herself. It was an upsetting ride home, however, I got right to work and she had the slides in hand within a week. I never did hear back from her directly, but my primary care doctor received an addendum to her original report that stated I did, in fact, have polymyositis. In my heart, I felt she owed me at least a phone call with an explanation or to explain what is next. That never happened.

Looking well on the outside does not give doctors, or anyone else, cause to dismiss us. I will admit that after researching myositis at that time I found that it is a difficult disease to diagnose. At the same time, I found that I did not display the “typical” symptoms or blood test results. But, I was not the only one. According to the research at that time, roughly 25% of those who have myositis do not display the so-called “textbook” symptoms.

Throughout this process I learned a valuable lesson; we must be our own healthcare advocates. Had my family and I simply took the word of the first few doctors and gave up, I would be in a wheelchair now or much worse, not here at all. As it is I must walk with a cane partly due to the two-year delay of my diagnosis which prevented me from starting effective treatments early on and partly due to the nature of the disease itself.

In advocating for my own health, I began doing some things I recommend anyone do when facing an ongoing illness:

“But you don’t look sick” may come across as hurtful when you hear this from friends and family. Try to keep calm and do not become defensive. Communication is important so I try to explain how I feel on the inside. Also, try and realize that some people do not know what to say to those who are sick so words may come across as sounding “wrong” when their intentions were to make you feel better. This is a large part of why I started a myositis blog and Facebook group, Polymyowhat: Understanding Myositis. With these tools, we have a place to share our stories, get support from one another, and learn how to live better with myositis.

In our Facebook group, we have been discussing plans for the future of our blog and group to focus on myositis awareness. I hope we can work together to spread the message that myositis is a rare disease, it is life-changing, may be painful, and is often debilitating. We need to work towards better treatments and educating others, including doctors, on the importance of myositis and early detection so that we have a chance to avoid the most serious of complications such as muscle atrophy, lung disease, and cardiac involvement.

For some, you may still appear in the “Invisible Disability” category while others may have some outward illness appearance. No matter what you look like remember who you are on the inside. Do things to help others. Be a beautiful person by listening to a friend in need, educating others, and loving everyone for who they are on the inside, without prejudice.

For more information on Invisible Disabilities, please visit the website below.
http://www.invisibledisabilities.org/

The Invisible Disabilities Association has a wonderful and helpful website. There is a booklet that goes into detail on invisible disabilities and I recommend you read it and have your family and friends read it as well.

(A note on Johns Hopkins – The content of this article is only my opinion and experience. I have many other friends and family members that have received excellent and life-saving care from Johns Hopkins. Also, the Myositis center at John Hopkins was not yet established when I was first there. I am now a patient at the Johns Hopkins Myositis Center receiving excellent, life-saving care.)