Founded in 2015 by Jerry Williams who fought for over 3 years for a true diagnosis (polymyositis but has since changed to dermatomyositis), MSU was created after identifying an unmet need for patient-focused programs and services and support for those living with the Inflammatory Myopathies, which include dermatomyositis and clinically amyopathic dermatomyositis, polymyositis, immune-mediated necrotizing myopathy, antisynthetase syndrome, and inclusion body myositis, along with the juvenile forms of dermato- and polymyositis.

MSU is instrumental in helping to improve the lives of patients fighting this rare, complicated immune-mediated muscle, skin, and often multi-organ disease by being the very first patient-centered myositis organization to offer live, online, video patient support, education, and activity sessions that simply make sense for those living with a muscle disease that involves limited mobility and with patients spread across the world.

After much hard work and support from our group members, Myositis Support and Understanding decided it was time to reach toward the goal Jerry Williams had originally set when he started the first Facebook group, Polymyowhat. After raising funds to cover the costs, we officially incorporated on May 13, 2015, and were approved as a 501(c)(3) nonprofit organization in July 2015.

We work for and with you

We are a fast-growing organization with a ton of enthusiasm, determination, passion, and willingness to do what is needed to help promote Myositis awareness, provide education for the myositis community, and to achieve objectives we have created. The future of Myositis is bright, as is our future as an organization. We work daily with the myositis community to help improve lives.

Learn more about our patient-centered, from the Heart myositis programs, including our Myositis Patient Financial Assistance program.

If you are living with or caring for someone with myositis, join us for compassionate, caring, educational online and live video support. You are NOT alone.

Check out empowering opportunities to make an impact in the myositis community together with our partners and sponsors. We can all do something! Take Action.

Order MSU brochures, wristbands, and pens to share with family members and friends. Share with your doctors and ask they provide these to new patients with myositis.

Jerry Williams starts a closed FB group called “PolyMyoWhat” to fill an unmet need to provide information and support for other patients like him who felt isolated and alone in coping with a diagnosis of myositis.
2014

This is a needs-based program to help those living with myositis cover things like medical bills, costly mobility/assistive devices, and emergency household expenses. Learn more about the program here.

A time of growth

MSU, We are in the game!

Clubhouse is a unique experience. Some describe our rooms as hanging out in a “living room” chatting with friends and family. We agree that it has an intimate and cozy feel. Clubhouse is Audio-Only, has no cameras to worry about, and provides an easier user experience on mobile devices. You can download the free app in your app store. Then join Myositis Support. Our club is members-only so we can provide the safest space possible. Join to listen or to share. You will be welcomed with love and understanding.

Open to ALL who are impacted by Myositis, our Sunday support room has been reported by many as the highlight of their week; something they look forward to. We join together and discuss the realities of life with myositis.

Knowing from science that exercise/movement is beneficial for those living with myositis, we created a weekly Clubhouse room that is a part of the overall program, Myositis Support Gets Moving. In this group, we create and discuss our own movement plans/goals, work to increase our protein intake to help build muscle, and introduce the idea of working together with someone else, a support partner. On Thursdays, we meet on Clubhouse to discuss our successes, ideas, struggles, and barriers and work together as a group to motivate and encourage one another.

As of the start of 2022, and since the launch of our Myositis Patient Financial Assistance program in 2017, we have now given 250k! This program helps those who are living with myositis with costly mobility/assistive devices, emergency household expenses, and medical bills. This is not a copay assistance program. The large majority of our fundraising efforts support this program and we have committed to giving $100k in patient financial assistance in 2022. Thank you to our sponsors, donors, supporters, fellow patients and care partners for your contribution to making this a reality.

Learn how Myositis Support and Understanding came to be 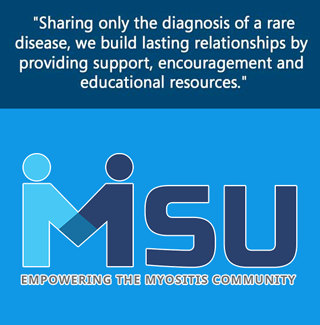 After several years of coping with a diagnosis of Polymyositis and finding little information or support, Jerry Williams started a closed Facebook support group “Polymyowhat?: Understanding Myositis” in 2010. After a few years and little activity, it became apparent that the name of the group, “Polymyowhat,” was a deterrent to those with other forms of myositis. Facebook group policies do not allow for a simple name change, nor did Jerry feel he had the time to put into the group alone. This was the tipping point of Jerry’s new-found determination to help others living with Myositis and to educate family and friends.

Late 2013, Jerry enlisted the help of Kate Rossi Stuart, who became the first administrator for Polymyowhat. Kate was instrumental in helping build the group’s membership and together, Jerry and Kate created a safe, loving and caring support system for Myositis patients and their caregivers, as well as a place to laugh and cry. However, they realized a name change was necessary in order to continue providing support to the Myositis community as a whole.

In January 2014 the group name officially changed to Myositis Support and Understanding and the group went live on February 1, 2014. The group’s name change, indeed, helped build the group membership, but it also opened up new opportunities for growth, outreach, and the start of an organization.

It was at the same time as the name change that the idea of the organization became a reality. As the group began to grow, Jerry decided he needed someone on the team who shared the same values, goals, and determination in order to accomplish and build upon what he had started. Sandy Morgan Block was added as a group administrator and has been instrumental in helping to build a strong foundation for Myositis Support and Understanding to continue its growth. Research, education and advocacy have been Sandy’s focus since joining forces with MSU, and she continues to help build relationships within the Myositis community that will open doors for the organization. As part of her role, Sandy is continually engaging the group members with her warm, fun-loving spirit and educational pizazz.

Myositis Support and Understanding began to expand the scope of the organization to include a variety of platforms to support those impacted by Myositis, which included a new website along with a public Facebook page, “Understanding Myositis,” which promotes awareness, education, and advocacy. The organization is now well represented on all major social networks including Twitter, Pinterest, Google Plus, Instagram, YouTube, and Flickr.

Feeling comforted that Myositis patients now had a great support mechanism, Jerry felt it was time to expand support beyond patients to include others affected by a Myositis diagnosis. In February 2014, a group for caregivers, family members, and friends of those living with Myositis was created. Myositis Caregivers, Family, and Friends is also a closed Facebook support group and is not for patients, but for those who are caring for a patient or a friend or family member of a patient seeking more information about Myositis as well as to give and receive support for the way the disease affects them.

The next endeavor, led by Sandy Morgan Block in June 2014, was to further assist the Inclusion Body Myositis community. IBM patients tend to have different questions and needs than those with other forms of the inflammatory myopathies. Taking Sandy’s suggestion, Myositis Support and Understanding created the first ever closed Facebook support group for IBM patients, thereby creating a platform where they can privately discuss the effects of their disease and tools for coping and adapting.

In early 2015, led by Emily A. Filmore, we started a group for those “suspected” of having Myositis but have yet to be diagnosed. This group is helped through our traditional administrators as well as a group of mentors who are long-term members of our home group who support patients going through the often-frustrating diagnostic process.

MSU officially became incorporated on May 13, 2015, as Myositis Support and Understanding Association, Inc. Obtaining nonprofit status became our next immediate goal and on June 30, 2015, MSU obtained its 501(c)(3) nonprofit status allowing us to start the hard work.

Jerry Williams, Sandy Morgan Block, and Emily A. Filmore are the founding directors of MSU.

Learn more about the progress we have made since becoming a nonprofit organization that Empowers the Myositis Community, from the Heart.

If you are interested in helping, please be sure to visit our Take Action, Get Involved, Fundraising, and Shop sections of this site. If you wish to make a tax-deductible donation, we appreciate any amount you can give on our Make a donation page.

As for our closed Facebook support groups, the membership continues to grow and the groups have kept the “family” dynamic where members, with only the link of a common rare disease diagnosis, build lasting relationships by providing support, encouragement, experience, and educational resources.