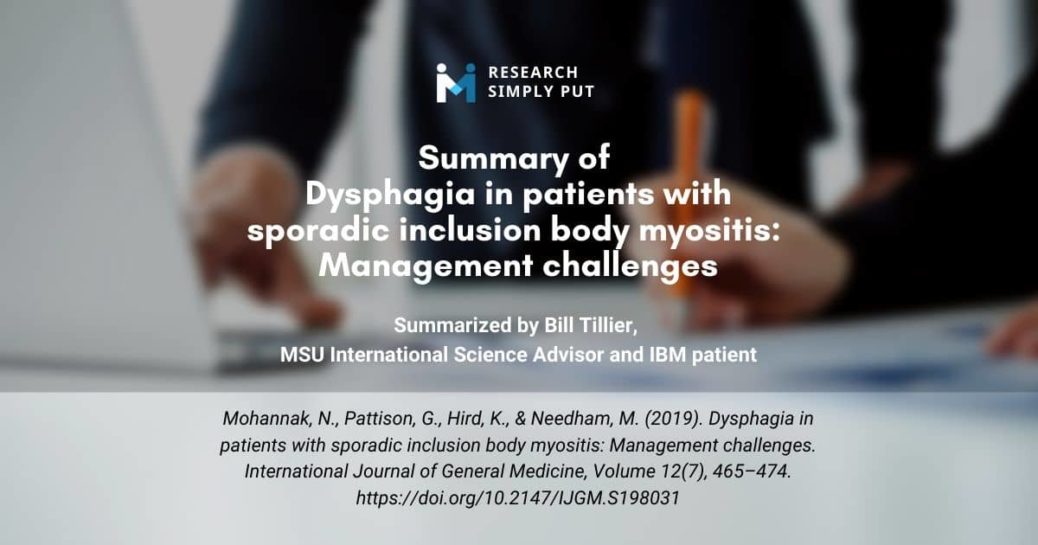 Dysphagia means difficulty swallowing. It can be caused by several different things, when it is caused by inclusion body myositis (IBM) it is called myogenic dysphagia. It is a serious and common complication of IBM that needs to be diagnosed when present and patients need to be aware of it and its symptoms and management. It is serious because difficulty swallowing commonly leads to choking that can cause death or, it can lead to having food go down into the lungs—called aspiration—this commonly leads to pneumonia and may cause death.

Being able to eat is a major part of day-to-day life and impairments in swallowing reduce the quality of life for patients. Many patients who have choking episodes become afraid to eat and malnutrition is a serious concern. Unfortunately, although this is a common side effect of IBM, it has not received much research attention in terms of how to treat it or best manage it.

Because research has been minimal, it’s hard to know exactly how common dysphagia is in IBM. Studies range from 40% to 80%. It is clear that dysphagia is more common in IBM than in other myopathy diseases.

Why does this happen? The medical answer is that the opening at the top of the esophagus—the upper esophageal sphincter (UES)—tends to shrink in IBM due to weakness in the associated muscles. This leads to food getting stuck in the throat (it won’t go down) causing the patient to swallow repeatedly. This leads to the danger of blocking air intake or having “food go down the wrong way”—into the lungs. The article mentions that a recent study showed that in a sample of 25 cases some 60% had aspiration—food going to the lungs, and 25% developed pneumonia.

The article notes that the exact impact of IBM on the muscles involved in the throat is not understood and differs from the impact of IBM on skeletal muscles: more research is required to determine why this is and what it means.

The article emphasizes that because IBM comes on so slowly, patients may not notice changes in swallowing or may become used to them and not mention them to the doctor. Early diagnosis is critical and the following features should be looked for. The feeling of food getting stuck in the throat, the need to wash every mouthful down with liquids, regurgitation (needed to bring food back up and swallow again) or outright choking episodes. These features should be monitored during the course of IBM in an individual because, while they may be present initially, they also may develop during the course of the illness. When dysphagia is suspected, tests can be done to determine its extent. In the most common test, the patient swallows a liquid that shows up on a scope and the doctor watches how the liquid goes down the throat. This test is commonly called a barium swallow or sometimes an upper G.I. barium examination. Its common abbreviation is VFSS. Another common test is the fiberoptic endoscopic evaluation of swallowing (FEES). This test involves inserting a thin tube through the nose with a camera on the end to evaluate swallowing. If it appears that swallowing is impacted by IBM, either of these two tests is recommended.

Treatment falls into two categories: non-invasive and invasive. Noninvasive treatment is especially important when dysphagia is diagnosed early. It commonly involves an exercise that the doctor or a speech pathologist will teach you to do. To get an idea of what it looks like, here is a YouTube link. This is only an illustration and you should ask for specific instructions from your medical team to develop exercises that will be the best for you. https://www.youtube.com/watch?v=NHZ5g8roe_A

Other treatments may include various medications. There is no standard medication used for dysphagia in IBM although IVIG is a common choice to begin with. The problem with this medication is that benefit is usually short-term.

Invasive treatments may include the use of a balloon to expand the upper esophagus. This is commonly called balloon dilation therapy. In some cases, Botox treatment is used. Finally, in some cases, an operation may provide benefit. In this operation—a cricopharyngeal myotomy—a muscle in the throat is cut, redistributing the pressure involved in swallowing. Of course, the operation is irreversible.

In cases where malnutrition is a major problem, a feeding tube may be inserted through the abdominal wall into the stomach. In IBM patients this procedure may or may not be helpful; the risk of aspiration is still there. Clearly, treatment options must be carefully considered with your medical team in order to choose the best options given your particular situation.

The article concludes that more research should be done and it ends with an emphasis that screening and early diagnosis are vital as the best treatment is exercise of the throat early in the disease process. Problems swallowing should be on the radar of every IBM patient and their medical team and is a vital part of the ongoing overall treatment strategy. The article suggests that clinicians should screen swallowing function by asking questions at every appointment.

The following information may also be helpful.

Several other aspects are important to consider including psychological counseling:

Download a copy of this summary to keep on hand and tak to your healthcare team.

View the full-text review article and take to your doctor and healthcare team.