Use Hashtags to promote Myositis

Home Use Hashtags to promote Myositis 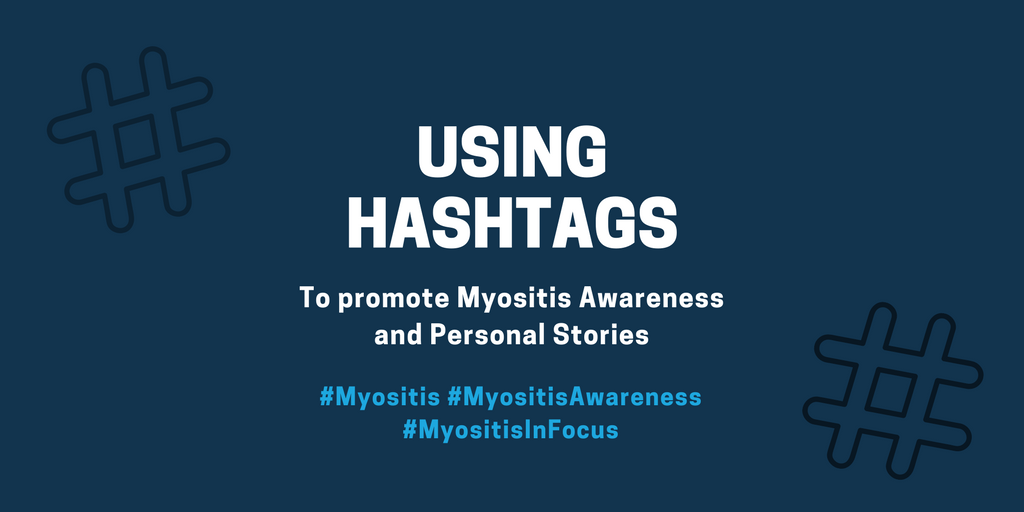 Use Hashtags to promote Myositis conversations

Social networking is an effective and fun way to promote Myositis awareness, however, many do not understand how to use – or the importance of – hashtags.

A hashtag is simply a keyword which starts with a pound sign (#) and is related to the content of your post. The ultimate goal is to create a conversation surrounding your topic or keyword. For example, this article talks about hashtags, therefore a hashtag which would focus on the subject of hashtags would look like this: #Hashtags. And, when you create that on a social network that allows hashtags, it would create a link to all content with that same tag.

For optimal performance, a hashtag should be one word. If you wish to use a key phrase, just combine the words and remove the spaces, like this: #MyositisInFocus or #MyositisAwareness. Using both upper and lower case letters is acceptable for hashtag use such as #myositisawareness and #MyositisAwareness, which are considered the same, and both will lead to the same topic/conversation list. Using two separate words such as #myositis #awareness is not the same as using a key phrase such as #MyositisAwareness. The first, #myositis, will provide posts under the keyword “myositis” while the second, #awareness, will provide posts related to the keyword “awareness,” but not specifically Myositis awareness.

What hashtag should I use?

When incorporating hashtags into your posts, first determine if a hashtag exists that you can use that will add value to the conversation created around that keyword. We have been using several over the years, including #Myositis so that hashtag exists, and if your post is about Myositis, you may want to use this as one of your hashtags.

You can search trending hashtags and find those already in existence by visiting http://twitter.com/search-home or www.hashtags.org

Creating your own hashtag

Examples of Myositis and related hashtags

A note about conflicting hashtags: An example of conflicting hashtags would be using #IBM for Inclusion Body Myositis. IBM is a well-known company which uses #IBM when sharing content. If you use it for IBM, the illness, it would not do any harm, but the search results for that hashtag will contain mixed topics; Myositis and IBM company posts.

Most networks which allow hashtag usage can be searched by clicking on the hashtag or through the use of a search bar. When you click on a hashtag, you will be presented with a listing of all posts, articles, images, videos and audio that were tagged with that keyword, or hashtag.

Use simple logic when dealing with hashtags. Like in the example above, if your post discusses your day at the beach and a fall due to your muscle disease, using #myositis would be appropriate as would things such as #NoDayAtTheBeach, #DayAtTheBeach, #Frustrated and many other variations.

Using hashtags in a closed Facebook group is not effective because closed groups are not available for general search.

The ultimate goal of hashtag usage is to create a conversation around a specific topic. Keeping this in mind, along with the other tips mentioned, you will become a hashtag pro and help promote #MyositisAwareness and education.