Identification of Predictors for Interstitial Lung Disease in Myositis Patients: A Systematic Review

We have given $250k in Myositis Patient Financial Assistance! 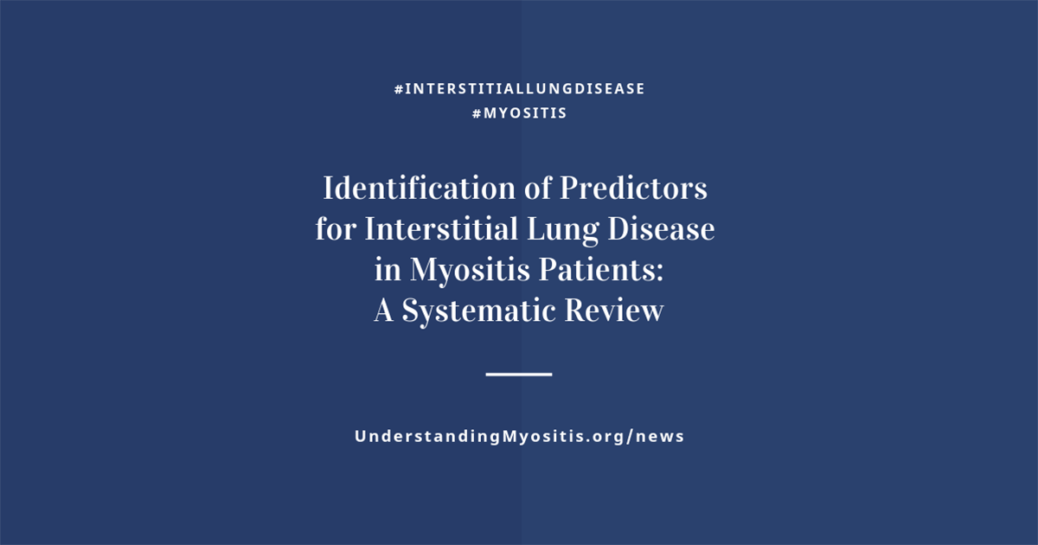 Interstitial lung disease (ILD) is a well-recognized complication in the spectrum of diseases known as the idiopathic inflammatory myopathies (IIM). Individual studies of IIM-associated ILD have shown variation in the progression of the disease and, because of small sample sizes, prognostic factors seem to be difficult to identify. Prognostic factors are those characteristics or conditions that can be used to estimate or predict outcomes of disease. Because of the rarity of the disease, it is unlikely that large sample size studies will ever be performed, and a review and meta-analysis of previous studies provides a viable approach to improve the identification of prognostic factors. A meta-analysis is a statistical method for combining data from multiple studies to find unknown common results. This type of study is powerful because it aggregates data, leading to better estimates than can be obtained from any individual study. However, in this type of study, it is important to note that researcher bias in the criteria used to select studies, where to search for relevant studies, and other factors can significantly affect the results.

The purpose of this study was to identify relevant prognostic factors for IIM patients with ILD. The researchers searched databases for studies that addressed all causes of mortality in IIM-associated ILD to include in their review and meta-analysis.

From a total of 5892 articles reviewed, 32 were chosen for this analysis. The review included articles that appeared in the selected databases through August 9, 2018. Of the 32 articles selected for inclusion, 30 were conducted in Asia, which limits the ability to generalize the results: 22 in Japan, 6 in China, 2 in Korea. The remaining two were conducted in the US and Mexico. In total, 962 participants were included in the analysis. The criteria used for selection were that they had to examine ILD associated with polymyositis, dermatomyositis, clinically amyopathic dermatomyositis (CADM) and antisynthetase syndrome (ASS) in patients older than 16 years of age. From the 32 articles analyzed, 28 prognostic factors for all-cause mortality were identified. Potential prognostic factors were only included if they appeared in at least five of the studies. From the 28 prognostic factors identified, and using various types of analyses, six were found to be statistically significant:

The authors note significant limitations in their study. Among other things, the quality of data was rated using a standardized evaluation system and was found to be either low or very low quality. And bias inherent in the individual studies included in this review are multiplied in meta-analysis. For example, many of the individual studies had very small sample sizes. The study also combined the four types of IIM and did not include any subgroup analysis. The heterogeneity of the four types may not be conducive to an all-inclusive analysis. Although these limitations are significant, the authors state that this was the first analysis of its kind and encourage further study on this important topic.