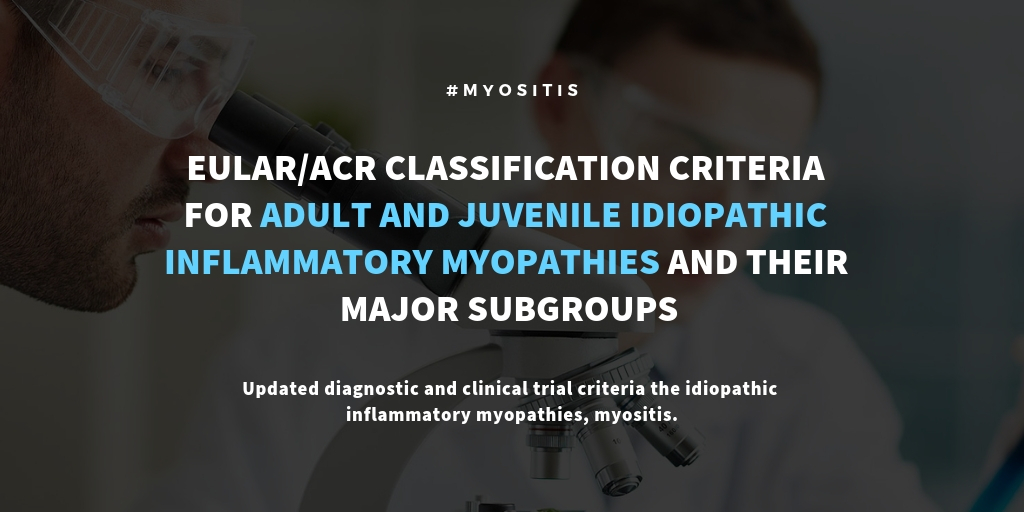 The objective of this paper was to develop and validate new classification criteria for adult and juvenile idiopathic inflammatory myopathies (IIM) and their major subgroups. More specifically, the goal was to define minimum essential, easily available clinical and laboratory features to 1) distinguish IIM from similar but different conditions with high sensitivity and specificity, and 2) distinguish the major subgroups of IIM. The researchers used criteria from published documents and expert opinion and employed statistical analysis to identify criteria and consensus methodology to arrive at their conclusions. Consensus methodology is used to establish agreement on controversial subjects through a structured process.

The paper describes the Idiopathic Inflammatory Myopathies (IIM), which are collectively known as myositis, as typically exhibited by muscle weakness and muscle inflammation. The common subgroups are dermatomyositis (DM), polymyositis (PM), and inclusion body myositis (IBM) in adults; and juvenile dermatomyositis (JDM) in children.

Clinical trials and studies require patient groups in clearly defined categories, but the multiple diagnostic and classification criteria used for IIM are problematic. For outcome measures and improvement definitions in clinical trials, the International Myositis Assessment and Clinical Studies (IMACS) Group has reached consensus. But for the diagnostic and classification criteria, many are not validated and have significant limitations. The Bohan and Peter criteria are the most used, but they are not explicitly defined and do not specify how to exclude other forms of disease, leading to potential misclassification. Recent research has identified additional, potentially valuable features, such as myositis-specific autoantibodies, but they have not been tested adequately.

In 2004, the International Myositis Classification Criteria Project (IMCCP) was formed as an international collaboration with experts from adult and pediatric rheumatology, neurology, dermatology, epidemiology and biostatics. The IMCCP formed a steering committee and a working committee which gathered data for inclusion in the study. The study included data from 976 IIM patients (74.5% adults, 25.5% children) that was collected between 2008 and 2011 from 47 sites across the world. The subjects included the following cases:

Additionally, to ensure specificity and sensitivity in the criteria, the study included 624 comparison cases (81.6% adults, 18.4% children) with conditions that can mimic IIM. These cases included the following conditions:

Then, if a patient falls into the Probable or Definite IIM category, a classification tree was used to further classify IIM into subgroups based on signs and symptoms, with the exception of immune-mediated necrotizing myopathy (IMNM), juvenile polymyositis and hypomyopathic DM, because the sample size for these cases was too small to be meaningful. 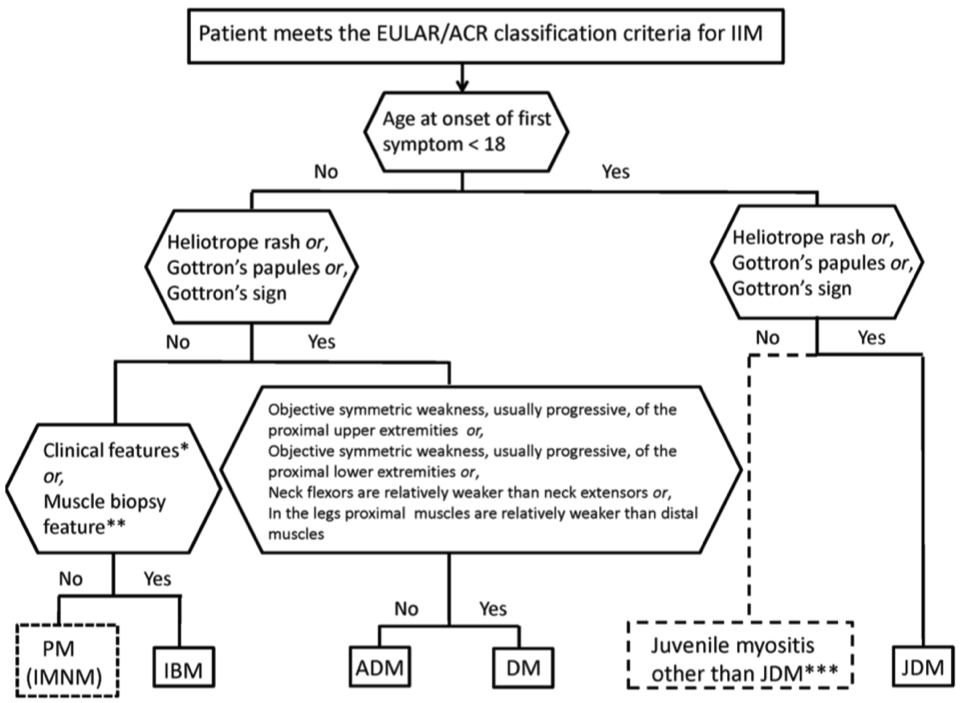 The authors included additional elements to the development of the classification system that are worth noting. For patients with juvenile dermatomyositis and the presence of skin rashes, the scoring system does not include muscle biopsies, which were not frequently available. The criteria correctly classified 97% of juvenile dermatomyositis (DM) patients without muscle biopsy data. The authors also compared their results with other classification systems. Some were found to have either high sensitivity and low specificity (such as Bohan and Peter), or high specificity and low sensitivity. The study also included multiple validation tests that confirmed excellent performance of the criteria.

The result of this study is that new classification criteria for IIM have been developed that are:

These criteria can be used as diagnostic and classification criteria for clinical trials. One of the limitations of this study is that the majority of the cases were Caucasian patients and could differentiate among ethnic groups, if differences exist. Another limitation was that subjects had to have the disease for 6 months and did not include new onset patients. Three categories did not include enough test subjects, despite having taken 10 years to gather the data. And there was a very low frequency of autoantibody data in the study. Only the anti-Jo-1 autoantibody had enough cases to include in the criteria. This set of criteria should continue to be updated and refined as new methods of testing and detecting IIM become available.

The authors also created a web calculator based on the criteria, which can be found at the following link: www.imm.ki.se/biostatistics/calculators/iim