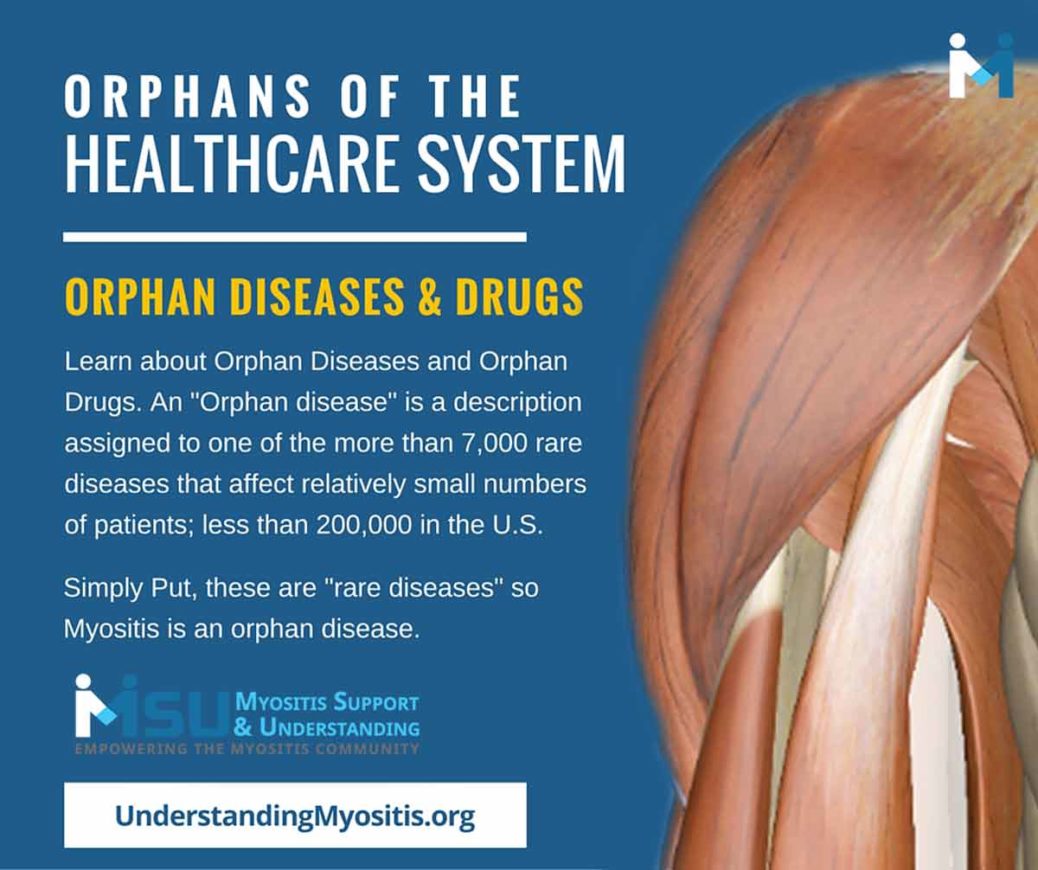 Are we the Orphans of the Healthcare System?

As a patient living with a rare disease you may come across words such as “orphan disease” and “orphan drugs,” but not really understand what they mean or how they differ from common diseases and drugs. To help you understand better, we have provided some information and a little bit of background.

What is an Orphan Disease?

Simply stated, an “orphan disease,” sometimes called a “rare disease,” describes one of more of 7,000 diseases affecting relatively small numbers of patients. In the United States, a rare disease affects 200,000 patients or fewer. Myositis, including its subtypes of Polymyositis, Dermatomyositis, and Inclusion Body Myositis, are orphan diseases.

Orphan diseases collectively affect as many as 25 million people in the United States. Even though rare diseases may, individually, only affect between hundreds to hundreds of thousands of patients (50-75k patients in the U.S. have been diagnosed with Myositis), the Rare Disease Community as a whole is quite large. There are 7,000 rare diseases which each affect a number of people but when taken together the numbers add up.

Why it’s important to have “orphan status”

Prior to the United States rare disease laws, patients that were diagnosed with a rare disease were often denied effective treatment options due to prescription drug companies not having an interest in the development of a drug that would incur a loss. These diseases became known as “orphans” as the companies did not want to adopt them. This began to change with the creation of the U.S. Orphan Drug Act (ODA) in 1983. Having a disease classified as rare, or given orphan status, is essential to drug development under the ODA.

What is an Orphan Drug?

New drugs are developed frequently for common diseases, or those where the patient population is large enough that the pharmaceutical or biotech company creating the drug would likely make a profit. With orphan drugs, the cost of development often presents the company with a financial loss.

Thankfully, regulatory agencies in the United States have taken steps to help reduce this issue in order to help orphan disease patients.

Recognizing that adequate drugs for rare diseases or disorders had not been developed in the U.S., and that drug companies would likely incur a financial loss in developing drugs for rare conditions, the U.S. Congress, in 1983, passed the Orphan Drug Act. The Orphan Drug Act offers incentives to encourage companies to develop drugs for the small markets of individuals with rare diseases or disorders.

Some of the incentives include:

Prior to the passage of the Orphan Drug Act, very few orphan drugs were available to treat rare diseases. Since the Act, the FDA has approved more than 200 orphan drugs for marketing in the U.S. and more are currently being developed.

Resources for this article provided by: