A short story about Jerry Williams, president of MSU, and getting involved

Home A short story about Jerry Williams, president of MSU, and getting involved 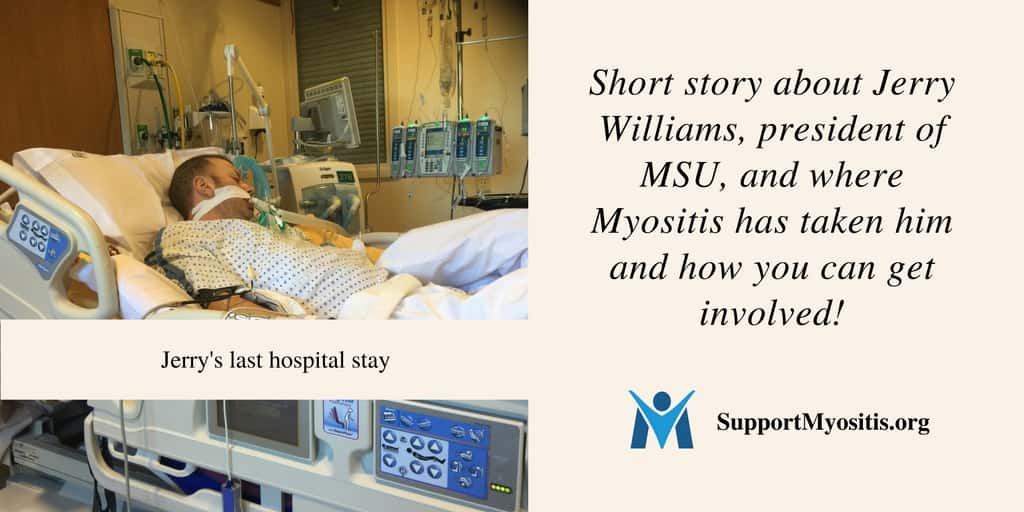 Myositis is a Rare Disease

Patients, Caregivers, Family Members, and Friends can get involved

It has been over 13 years since Jerry Williams, president of MSU, was diagnosed with Polymyositis, sometimes simply referred to as Myositis. It took 2 1/2 years for him to obtain a true diagnosis due to the rarity of myositis, but was misdiagnosed with many other disorders in the meantime. What happened due to the misdiagnosis? It allowed myositis to weaken his muscles to the point where he was in a wheelchair for over a year and used devices like walkers and canes to help him get around, lived in chronic pain each and every day with little relief from medications, and tore apart his social life as many of friends didn’t understand or were not able to “deal” with the complicated life he was living now. This all started for him at the age of 27.

Jerry, always the work-a-holic, was no longer able to work and had to go on Social Security Disability to help cover the expenses of daily living. Of course, the amount per month he received was nowhere near enough to cover expenses he needed, but he was lucky as his husband was able to work, therefore making his financial situation easier. While we have heard many sad stories of husbands, boyfriends, wives, and girlfriends, leaving their partner who was going through the same thing as him, Jerry’s husband stayed and together they learned new ways of living.

A long journey to diagnosis with many complications

After being diagnosed, Jerry went through extensive testing, and over the years, has tried almost every treatment option available with no help with his condition. Finally, about a year ago (2015), he was placed on Tacrolimus and is now doing better. But, throughout the years, Jerry has had numerous complications resulting in seizures, bowel perforation, blood disorders, strokes, steroid-included diabetes, and osteopenia, living on IV nutrition awhile due to massive weight loss, and other health challenges resulting in many hospitalizations. Although, one of the first and most debilitating symptoms he has faced is pain, which he struggles with each and every day.

Jerry is thankful that with having Medicare and a supplement that pays the balance, his insurance covered it all. This, unfortunately, is not the case with every patient. Prior to the ACA (Affordable Care Act), many patients were reaching their lifetime limits on private insurance at very young ages causing them to go into massive debt just to get the health care they deserved.

We share this very short version of Jerry’s complicated and painful story because it is common among those living with this rare, chronic, autoimmune disease that seems to always take away from the patients lives, leaving them physically, emotionally, and financially distraught.

We want you to know that there is help

Myositis Support and Understanding Association, Inc. (MSU) provides the help patients need. MSU is a relatively young 501(c) 3 nonprofit organization that was founded by Jerry after years of operating a Facebook support group and with dreams of one day starting a nonprofit that will help all myositis patients, including polymyositis, dermatomyositis, inclusion body myositis, and the juvenile forms of poly-and dermatomyositis. Jerry began researching and learning all he could about the forms of myositis.  Thankfully, he had help forming the nonprofit by author and now MSU advisor, Emily Filmore, and board member emeritus, Sandy Block, who have also helped make MSU what it is today.

There are ways for everyone to get involved

In the short history of MSU, founded in May of 2015, we have come a long way. We now operate 3 Facebook support groups, one for all myositis patients, one for family members and friends of someone with myositis, and a group specifically for IBM patients and their caregivers as they often have different needs than the patients with other forms. We have also set up our financial assistance program, and we provide information, on request, by sending out brochures and information cards. Our next set of goals expands upon our education program and outreach efforts.

So, why are we telling you all of this? Well, there are a couple of reasons. First, to advise you that while myositis may have you down a lot of the time, you can still help make a difference in the Myositis community by joining MSU as a group administrator, a volunteer, or as a Board Member. Currently, MSU is made up entirely of patients. But, we want to stress that you do NOT have to have myositis to join us on the board, or in any other official capacity. We would love to bring on family members and friends to help bring the board new ideas and implementation of new programs and services.

The second reason we tell you this is to ask for your help. While we keep our expenses low, we require contributions to help keep MSU up and running, to continue the programs we have started, to have the funding to provide financial assistance to patients and to create and fund new programs and services.

We hope, with this very short story, you can see now that we can all make a difference in some way and our hope is that you will get involved!

We know we can count on you!

Make a Donation Get Support